EVS Energieversorgung Sylt GmbH has built a new chp plant with a total firing thermal capacity of 10.3 MW at its site in Westerland on the island of Sylt.

Electricity and heat are generated by two CHP units and a gas boiler. The later retrofitting of a further gas boiler is prepared. Optionally, an additional electric boiler (power to heat) can be installed in a later expansion stage. The thermal energy is fed into the existing district heating network and the electrical energy is fed into the power grid of the local utility company.

S&L Energie-Projekte GmbH was commissioned with the lead design consultancy services for this project by the project developer Hansewerk Natur GmbH. The object planning was carried out by the Hamburg company WTM Engineers as a subcontract to S&L. The contract for the construction of the CHP building was awarded to the company Aug. Prien, while the plant technology was supplied by Kraftanlagen Hamburg.

After a construction period of 7 months for the building and 6 months for the plant engineering, the new CHP plant was successfully commissioned and handed over to the client EVS in March 2021.

The two CHP units from INNIO Jenbacher, type JMS 416 GS-N.LC with 999 kW electrical output each are operated heat-controlled. The gas boiler plant generates the additional heat energy required for the district heating network. Two buffer storage tanks with a total volume of 200 m³ were installed next to the building to extend the running time of the CHP units and to improve the controllability of the overall system. 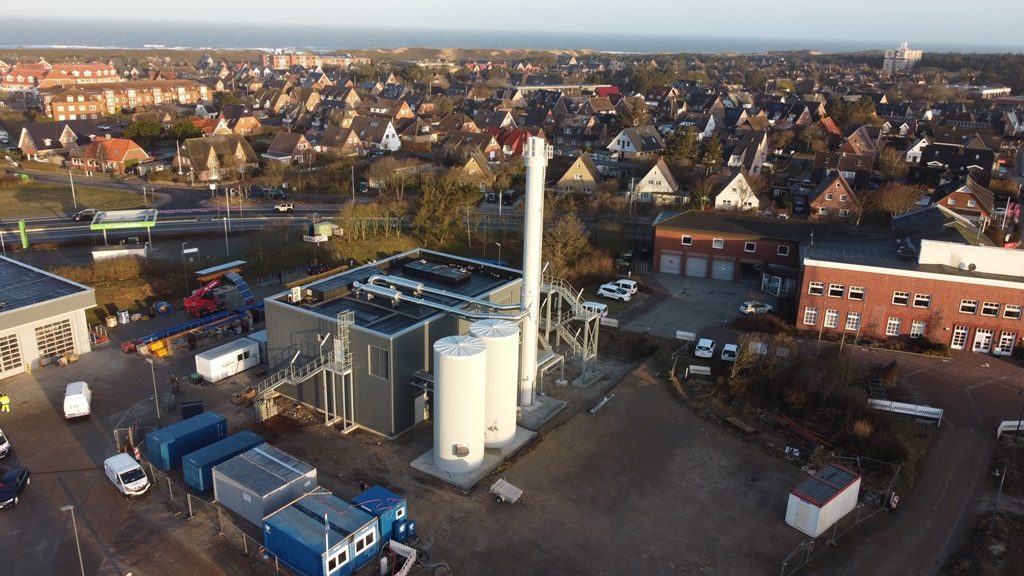 The new EVS CHP plant in Westerland. In front of the building, the two 100 m³ buffer storage tanks and the 28 m high chimney can be seen. Lying on the roof, the secondary silencers of the two CHP units can be seen.